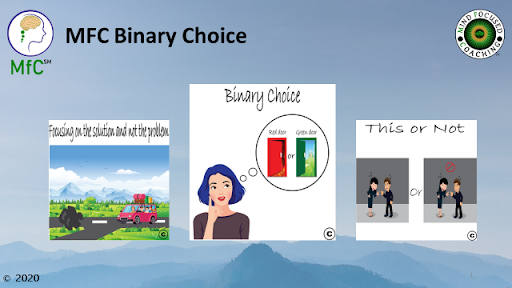 Everything is a Choice

Choices are a vital part of MindFulChoice™. Choice Theory, developed by Dr. William Glasser and his colleagues, is among the theories that has shaped MindFulChoice™ approach to choice. According to Dr. Glasser, “For all practical purposes we choose everything we do, including the misery we feel.”

Everything that a person encounters is a choice, but sometimes, they are not aware that they are making choices. Also, they might not always realize the options they have. For example, if you drive through the same intersection every day, you might not even think about it as a choice. But, in reality, you make the choice to drive straight through, and ignore the options of turning left and right. MindFulChoice™ focuses on the dynamics of choices and what they mean.

Choosing means selecting our own reality. We have to realize that we are constantly choosing things, and that those constant choices affect whether we succeed or not in the future.

Some Tools for Choosing with MindFulChoice™
MindFulChoice™ is, essentially, a process for making decisions. It is binary—it asks you to reduce choices to two options and choose between them—and uses heuristics, or simple rules of thumb, to make decisions. It is governed by a system with a specific order based on the importance of each step.
MindFulChoice™ uses principles borrowed from software engineering and cybernetics and applies them to how the brain works. It uses those principles to explain aspects of brain activity including how information is processed and the speed at which the brain works.
Part of this process is the use of heuristics, the simple rules of thumb discussed earlier in the book. They work really well under most circumstances, but they can also lead to choices that go against logic or ignore probability. They might even cause a person to act against their own preferences or interests. Mistakes like these are called “cognitive biases.”

Normalcy Bias
One common cognitive bias is the “normalcy bias.” This is, basically, the mistaken belief that things will not change, especially not for the worse—essentially, that everything will remain “normal.” People tend to fall into this kind of mindset when there’s an impending disaster: they believe that the disaster won’t occur, and that if it does, it won’t be as bad as it’s predicted to be. People with a normalcy bias assume that because a particular disaster has never before occurred, it never will. Anyone who lives in a city or town built near a fault line, especially an inactive one, relies on the normalcy bias for their sense of safety—their belief that because no earthquakes have happened yet none will allows them to feel safe.

When a person is affected by the normalcy bias, they have difficulty reacting to new experiences. They see warnings and signs of trouble in the most optimistic way possible. Any aspects of the warnings that are ambiguous are taken to mean that the situation isn’t really that bad.