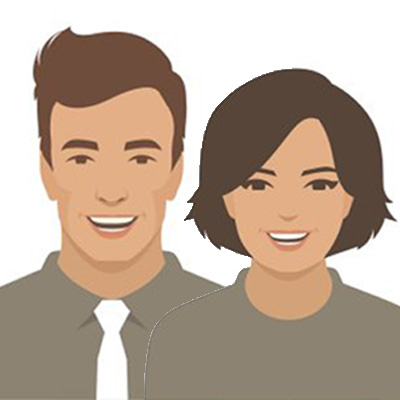 Arthur and Kara are a married couple in their late 40’s.  They have two young children who are 2 and 4 years old. They were referred to me for assessment because of serious marital conflicts, so serious that Kara was seriously questioning whether marriage could be saved, and was considering divorce.  Kara describes Arthur as detached, unfeeling and unhealthy, while Arthur describes her as demanding, critical, and unforgiving. After 5 years of marriage, both are very disenchanted with the state of their relationship and see therapy as their last chance to make things work

Both Arthur and Kara are in their late 40’s, and met when their lives were already quite well-established.  Neither of them has been married before. They readily acknowledge that they married late in their lives. During their courtship and their early years of marriage, they were quite comfortable with one another, and were able to maintain a considerable degree of independence while also sharing their lives.  However, having children changed all of that. Their lives became much more intertwined, as they were both needed to provide for the children’s care. They both had significant unmet expectations about how life with children would be and so became disillusioned. While Kara was very comfortable with Arthur spending a lot of time with his friends in separate activities early in their marriage, after their children were born she became resentful of his lack of full participation.  It seemed to her that he didn’t expect children to change his social life. Likewise, Arthur did not mind Kara’s perfectionism and attention to detail when it didn’t impinge on his life. But when they had children he became defensive about her demand that he conform to her standards, which generated conflict.

Arthur and Kara readily acknowledged that when they married, they had not really formed a strong connection with one another, and never expected to have to subordinate their own independence in favor of the relationship.  Unlike most couples who marry at an earlier age, and grow their lives together, Arthur and Kara essentially assumed that their lives would remain fairly separate, and would only overlap in a pleasurable way. Having children together upset the dynamic of their relationship in ways they weren’t ready for.  Neither Arthur nor Kara were initially willing to let go of their previous lifestyle. Karen, a more “responsible” sort of individual, was more ready to sacrifice her own agenda to meet the demands of parenting. Arthur was intent on being a good father, but did not want to accept Kara’s ideas about how he must change his life.  They were at an impasse, and their chances for a good outcome were low, since their marriage wasn’t founded on a strong connection. However, they did have the advantage of shared goals: doing right by their children and raising them in a nuclear family. When I shared my assessment with Arthur and Kara, I told them that they would have to do something they had never done before, and change the basic structure of their previous arrangement.  I told them that this was not likely to succeed, but that if they put in effort, there was a chance for their marriage to improve.

How we think, not what we think —Arthur and Kara had to learn to avoid rehashing old arguments.  In order to do so, it was necessary for them to become aware of their thought patterns and the triggers in what they thought that would bring them back to the same old conflicts.

What is going on, NOT why it is happening— During conflicts, Arthur and Kara would often get lost in accusing one of another of having negative motives for their actions.  Kara would characterize Arthur as self-centered, stemming from his childhood, and Arthur would accuse Kara of being hypercritical and perfectionistic to appease her family.  None of these characterizations was in any way helpful to improving the quality of their relationship. To help them find a new way of communicating, we focused on addressing what was going on, and how they were not working well together, instead of finding a cause or motivation for the behavior.

Assess a thought by its impact NOT its content — Oftentimes, Arthur and Kara seemed almost compulsively driven to say inflammatory things.  In fact, Kara at times complained that she was distressed that she could not be “open and spontaneous” with her husband.  I helped them recognize that they could avoid conflict by first considering what the impact of a thought, and expressing that thought, would be, rather than just judging thoughts on whether they were accurate or valid.  By doing so, they could reduce episodes of friction, which would in turn create further conflict.

B— Everything is harder than it looks:  In deciding to marry, it appears that Arthur and Kara only saw as far as the quality of the relationship that they had in the moment.  While they had discussed the possibility of having children, they’d never considered in greater detail how raising children would profoundly alter their lives. Consequently, they were taken by surprise by all the changes that having children created.

D— Don’t look back: Like many couples, Arthur and Kara would often rehash past conflicts, each arguing the rightness of their respective positions.  As a result, it was almost impossible for them to ever completely end any disagreement they have ever had.

K— There ain’t no such thing as a free lunch.  Everything is a trade-off: Both Arthur and Kara valued their life before marriage so intensely that they were prepared to give up very little.  They did not recognize that having a happy marriage would “cost” them some of their independence and some of the time they used to spend doing things for their own pleasure.  They were not able to see that they needed to re-balance their priorities in order to be happy after marriage.

O— For any and every problem, the first step to a solution is ALWAYS the same: Stop what you are doing!  It isn’t working: Much of the time, it appeared that the final goal of any given conflict between Arthur and Kara’s was not to achieve compromise or resolution, but rather to determine which of them was “right” in their position.  Arthur and Kara needed to recognize that this method did not reduce the number of conflicts or improve the marriage. To move toward their stated goal of having a better marriage, they had to first stop trying to “win” arguments, so that they could have a chance of succeeding in the marriage.

The first step in the MFC process of change is that of recognition—that is, becoming aware of the features present in the problem area.  For Arthur and Kara, the most prominent element of their problem that was outside of their awareness was their negative pattern of communication.  More often than not, their comments would be accusatory, critical, defensive, insensitive and reactive. They seemed unaware of just how hurtful their words could be.

So, my first focus was helping them listen to the way in which they were speaking to each other, and identifying an alternative method, which I called “civility.”  I established a goal with Arthur and Kara: they would pay attention to the words they were using before they said them and substitute civility for accusation or criticism.  It was somewhat difficult for them to recognize how casually they could be critical and accusatory at first, but they improved over time. Through this method, they learned to speak more civilly to one another, which led to less anger and fewer fights between them.  Even so, Kara was unhappy with having to “censor” herself. She expressed the belief that spontaneous communication was better, and that it was a sign of a positive relationship, more so than choosing one’s words and speaking in a friendlier and more thoughtful way was.  We examined this unhelpful concept and recognized that here, too, everything is a trade-off. In this case, giving up spontaneity created more peace and cooperation.

Once Arthur and Kara had achieved a measure of civility in their speech, we addressed the next level of intervention: learning to be thoughtful with one another.  Unfortunately, while they had been somewhat successful with civility, they had not yet become used to the new way of relating. So, while trying to be more thoughtful, they also returned to old habits like negative speech and defensiveness whenever they were disappointed.  This gave them an opportunity to see how their old priorities, such as being right, could easily undermine their new priorities, namely, getting along.

Thus far, Arthur and Kara have shown some flexibility and adaptability.  The likelihood that their marriage will succeed has improved somewhat. Still, there is a lot of work left to be done before they have made a strong foundation for a lasting relationship.

7. Comparison to Other Methods

While many therapies with couples address communication styles and old patterns of interaction, MindFulChoice lets the destination determine which issues need to be addressed and which don’t require that much attention. For Arthur and Kara, deciding whose position was “right” would simply continue their problems rather than produce creative solutions.  While we did discuss feelings that arose during conflicts, those feelings were only treated as aggravating factors, never as the focus of the intervention itself.